VENEZUELA is forcing people caught without face masks to do hard labour in an extraordinary punishment as the country tries to fend off coronavirus.

A video leaked online by the socialist regime shows three residents being forced into community labour after being spotted in public without face masks in Torbes, a municipality in the western state of Táchira. 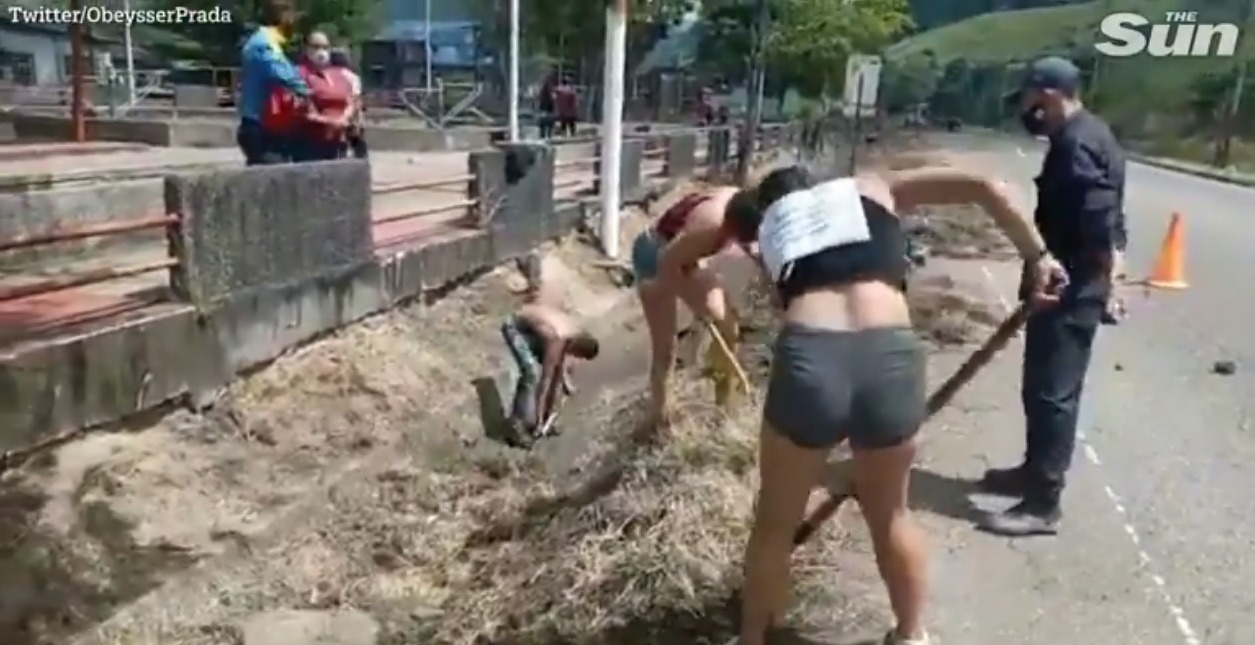 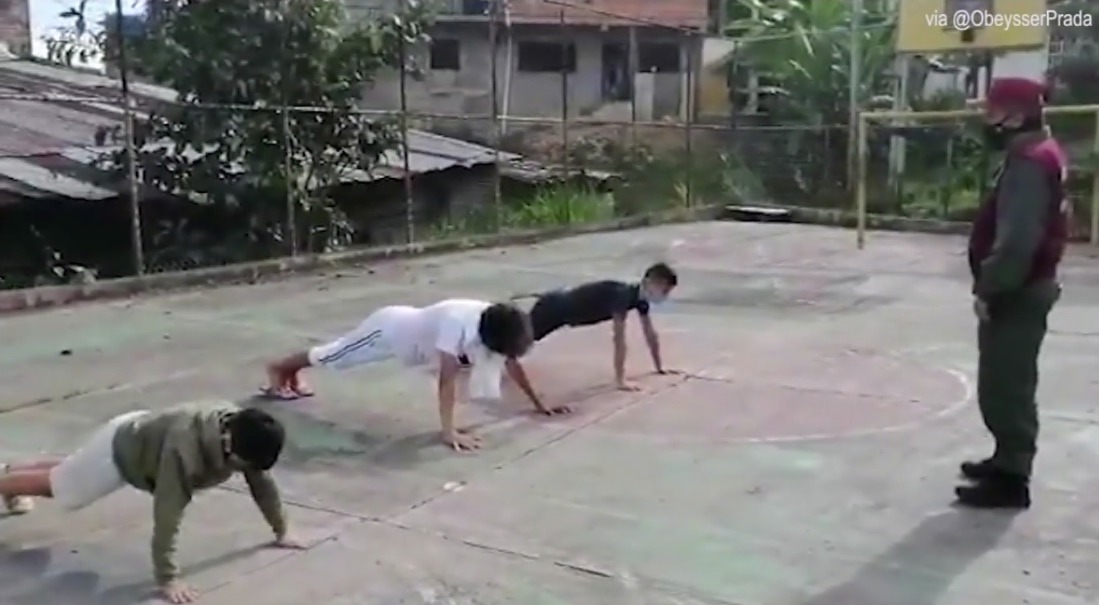 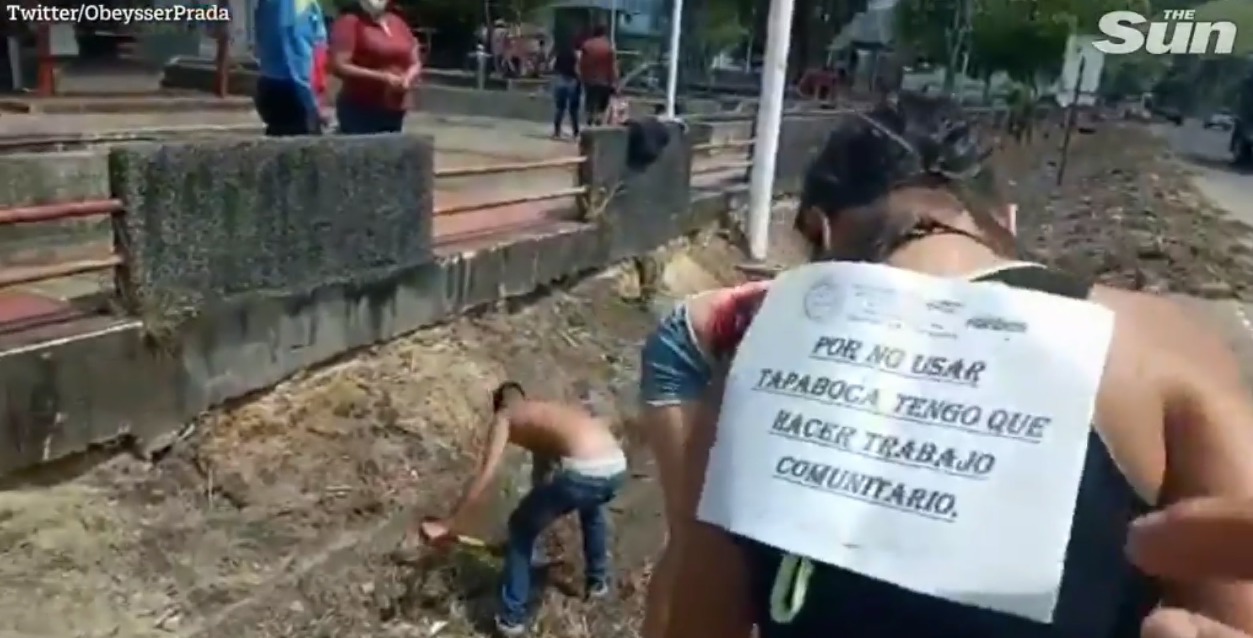 Later footage also shows three boys made to do push-ups after they were reportedly caught playing football when they should have been quarantining.

The incidents come as Venezuela deals with its first real outbreak of Covid-19, with statistics showing cases jumping and deaths beginning to soar over the last month.

The video shows a male and two females using shovels to clear out a ditch filled with dry grass just off a road.

A police officer supervises them while they go about their exhausting punishment.

A sign is attached to the woman's back reading: "I have to do community service for not using a face mask."

A second video shared widely by supporters of the controversial President Nicolas Maduro shows three young boys doing push-ups after they were found playing basketball during quarantine in Táchira.

A member of the country's National Guard took the boys through an exercise drill while forcing them to chant the coronavirus public health messages.

They also had to say: "The National Guard is enforcing the presidential decree due to the COVID-19 pandemic."

The videos have been released only a week after a gang loyal to Maduro recording shocking footage of themselves beating up two men with a basketball bat for not wearing masks in the capital Caracas.

Tachira, along with states Zulia and Apure, are currently quarantined as all three of the regions are experiencing concerning spikes.

Maduro's soldiers are manning the borders to make sure the travel restrictions are observed. 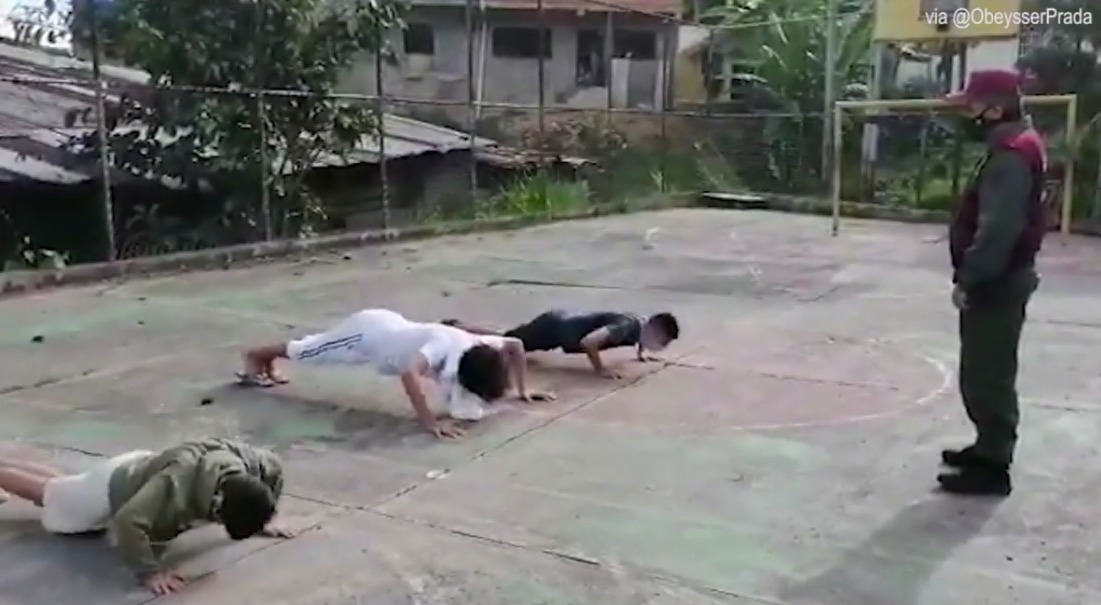 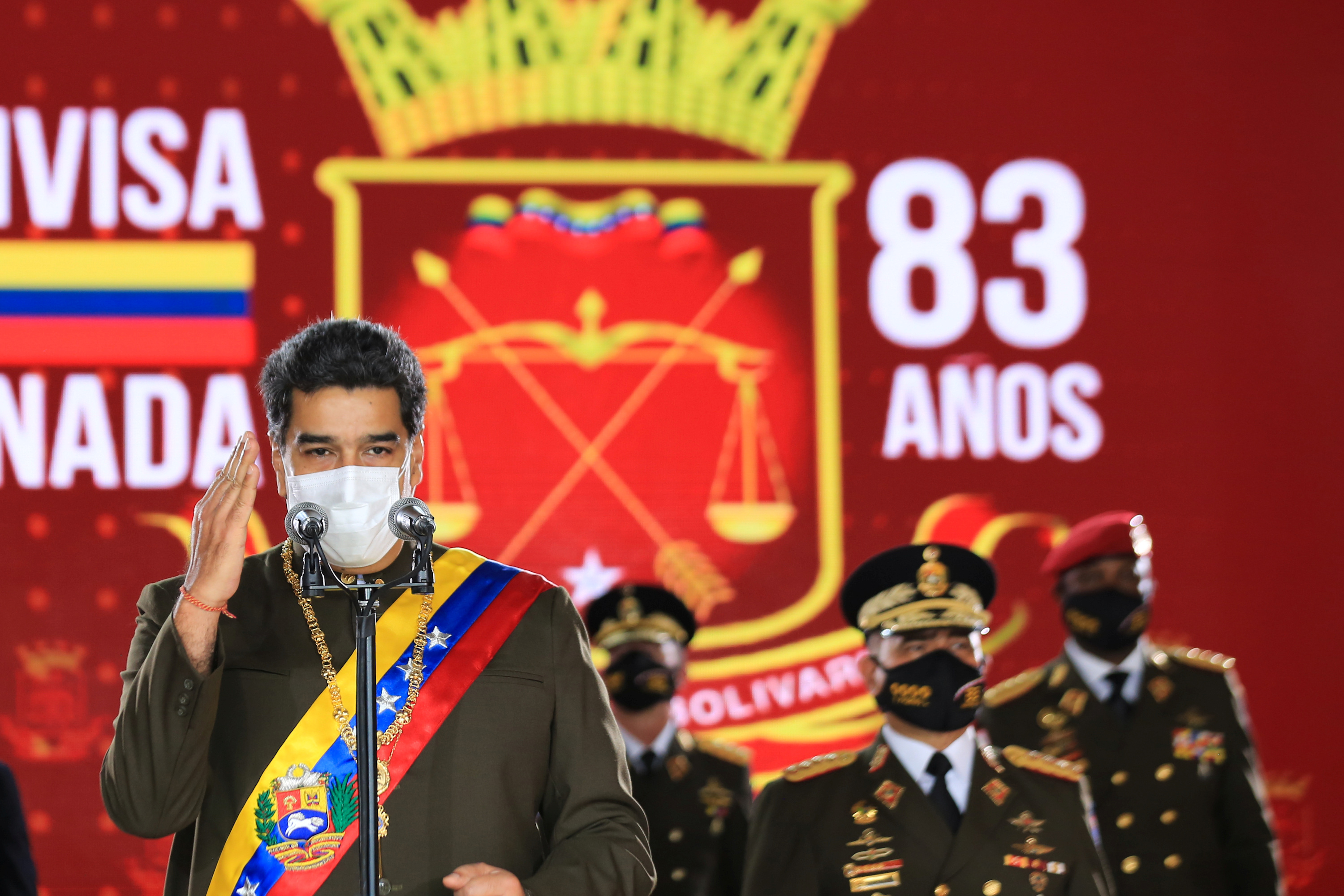 As of yesterday, Venezuela had 9,376 active cases.

There were 684 new cases on Tuesday as well as seven deaths, meaning 187 people have passed away from the virus in total.

Alarmingly for Maduro, both cases and deaths are beginning to rise.

The country managed to avoid the first wave which ravaged China, the US and most of Europe after a strict March lockdown.

But there is much scepticism over the numbers provided by the government and the cases and deaths are thought to be much higher given the country's rundown health service. 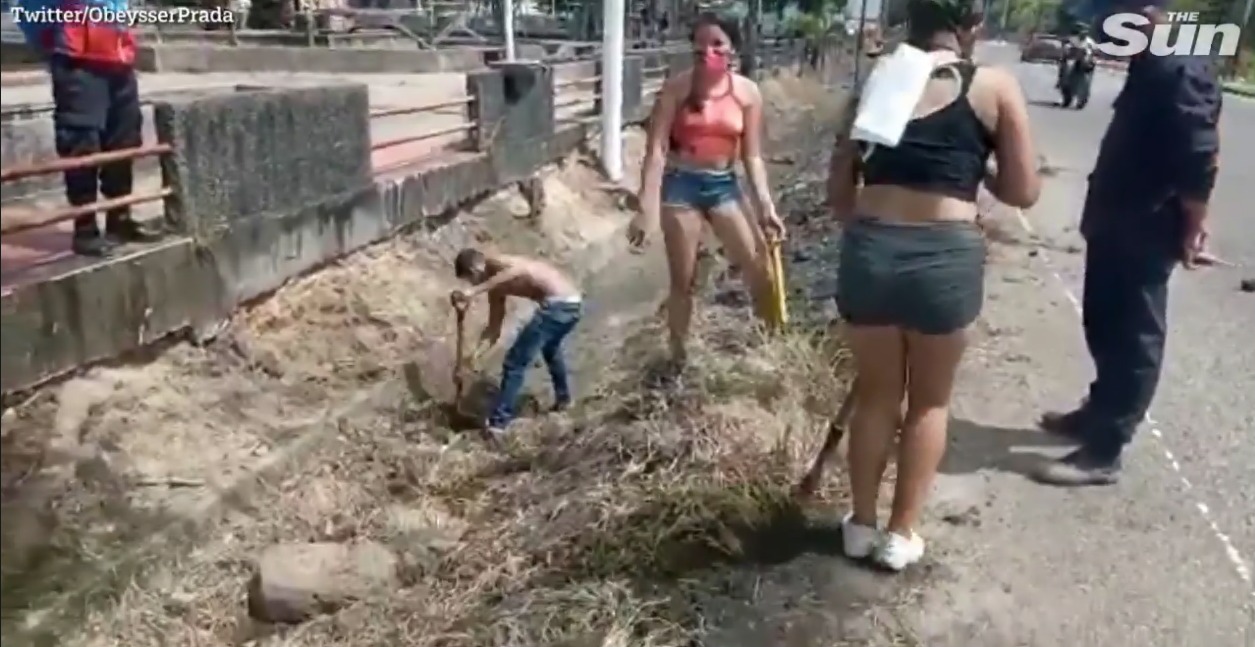 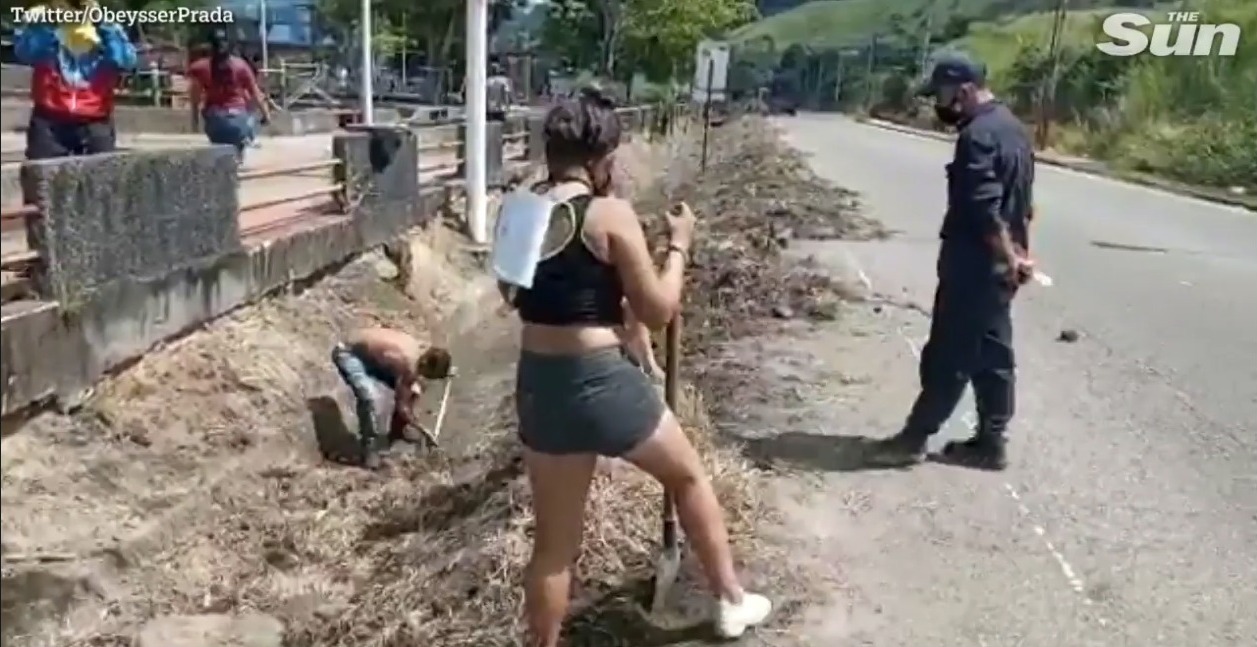 GOT a story? EMAIL [email protected]

08/05/2020 World News Comments Off on Venezuela forces people caught without coronavirus masks to do hard labour
Recent Posts
We and our partners use cookies on this site to improve our service, perform analytics, personalize advertising, measure advertising performance, and remember website preferences.Ok