Victim, 28, reveals how stepfather raped her when she was nine just a week before she was flower girl as he wed her mother at start of seven-year campaign of abuse 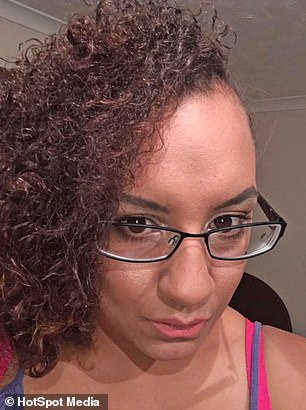 Rochelle Gray, 28, has bravely waived her right to anonymity to speak out about her years of childhood abuse

A woman who was raped and impregnated by her stepfather has revealed how her own mother let it happen.

In May Anokye Andrews was convicted of rape and a litany of sexual offences and jailed for 20 years.

Mary Andrews was found guilty of child cruelty and sentenced to five years.

Now, Rochelle has courageously waived her lifetime anonymity, as a victim of sex crimes, to reveal and speak out against the sordid abuse.

Stay-at-home mother Rochelle, 28, said: ‘With the pair behind bars, I finally feel safe.

‘But I’ll never get over the betrayal from my mother, and how she handed me to that monster.

‘Now I want other survivors to know that they can get justice too.’ 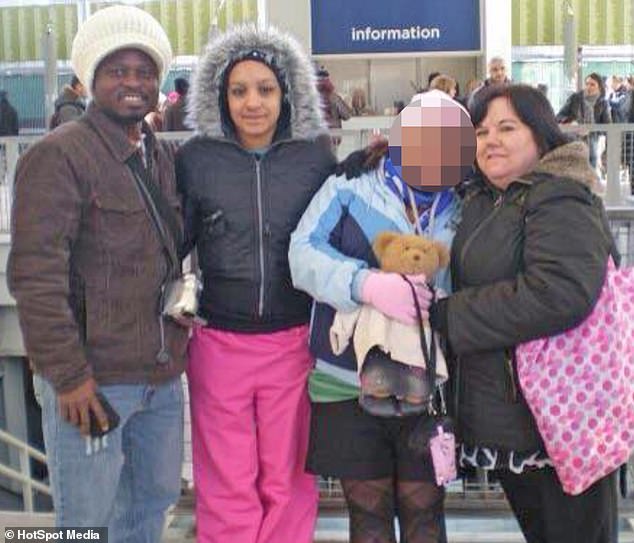 Anokye Andrews, left, raped his step-daughter Rochelle Gray, second left, for years from when she was just nine years old and Rochelle’s mother Mary-Louisa, right, allowed it to happen 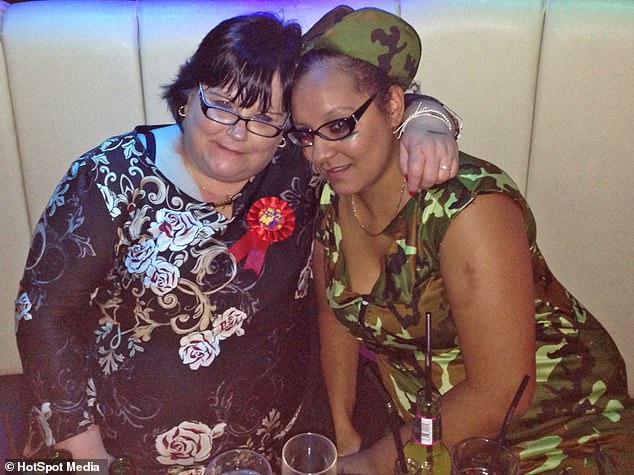 Mary-Lousia with Rochelle. When Rochelle, aged 14, revealed she had fallen pregnant with Anokye’s child for the second time, Mary-Louisa branded her a liar and an attention seeker 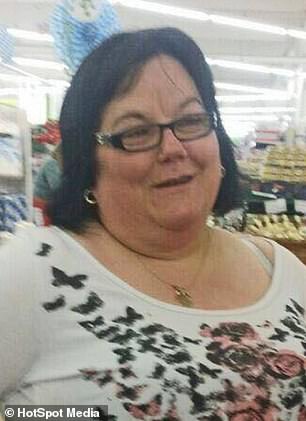 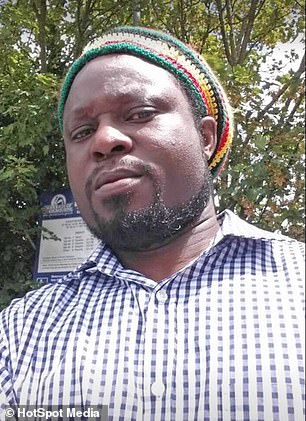 Mary-Louisa Andrews, 50, was jailed for five years while child-rapist Anokye Andrews was jailed for 20 years in May after Rochelle bravely told police of her childhood torment

Rochelle says: ‘My biological dad left us when I was four, so when I met Anokye, I was over the moon.

‘He treated me like a princess and took me shopping. Five months later, they announced they were engaged. I loved that Anokye was going to become my new dad.’

In July 2000, while Mary-Louisa was upstairs, Anokye abused Rochelle for the first time.

The Londoner explained ‘We were watching TV and I suddenly felt his hand slide into my underwear. Then, he began to fondle me.

‘Minutes later, mum came downstairs and Anokye quickly removed his hand. He then whispered that it was our little secret in my ear. I felt confused and embarrassed.’

The next week, Rochelle was a flower girl at her mother’s wedding.

She said: ‘As I stood for our family photographs, I forced a smile on my face. Over the next week, I hid in my room to avoid Anokye.

‘Then one afternoon, he stripped naked in front of me. That was the first time he raped me.

‘As I lay frozen, I heard mum hoovering upstairs.

‘I wanted to scream for help, but I was scared of what would happen to me.’ 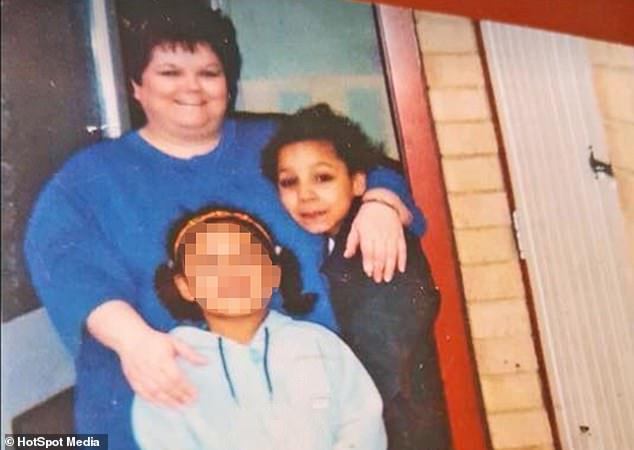 Rochelle pictured as a child, with mother Mary-Louisa, at the young age when her step-father was already raping and sexually abusing her multiple times a week

From then on, Anokye raped Rochelle four times a week, and in April 2003 Rochelle, then 12, fell pregnant.

She said: ‘When I saw the test was positive, I felt sick. I told Mum, but lied that the dad was a boy from school.

‘Mum demanded I got rid of it and drove me to the hospital where I had an abortion.

‘Anokye pretended to be shocked and threatened me if I told.’

Rochelle hoped the pregnancy would scare Anokye, but the abuse continued. 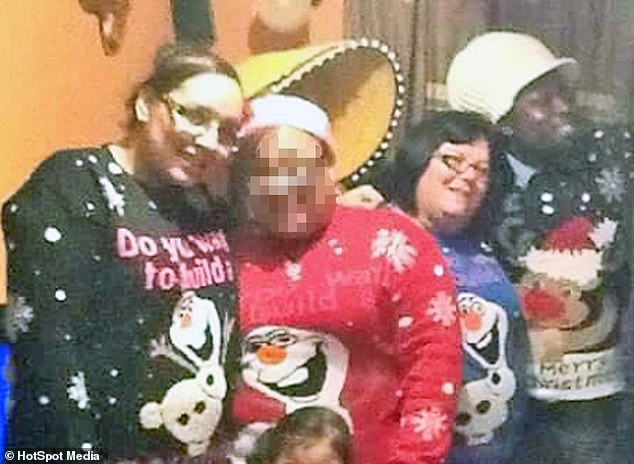 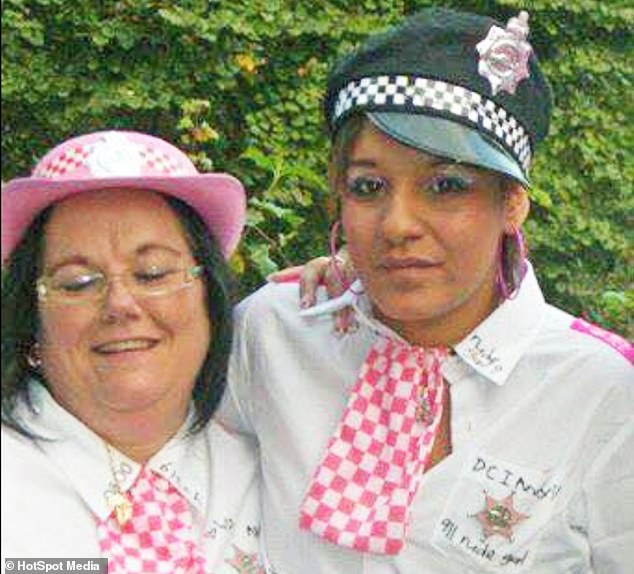 Rochelle said she would never understand how her mother let her stepfather rape her for years. ‘She failed me just as much as he did,’ she said

She said: ‘I’d had enough this time. I told Mum that Anokye was the father, and he’d been raping me for years.

‘She called me a liar and an attention seeker. My heart broke and I burst into tears.

‘I begged her to believe me, but she laughed about it with Anokye.

‘The following week, Mum drove me to the hospital for another abortion.

‘There she forced me to lie and tell them it was my boyfriend’s baby. I was disgusted.

‘She knew I’d been raped, but didn’t care.

‘Most nights Anoyke raped me in my bedroom while Mum was awake in the next room. It was a living nightmare.’

In September 2006, Rochelle fell pregnant for the third time.

She said: ‘This time, Mum paid for me to have an abortion done privately.

‘She wrote her name down on the forms, as she didn’t want anyone getting suspicious.

‘I’d never been so hurt in all of my life. I was living with two monsters.’

She stayed in touch with Anokye and Mary, but refused to visit them.

When Rochelle met her now partner, and had four kids with him, she told him everything.

She said: ‘I told him about the years of abuse I’d suffered. He helped me finally build up the courage to report them to the police. 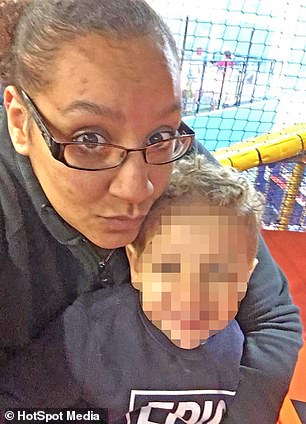 Rochelle, now a mother herself, said with her monstrous parents behind bars she feels safe enough to speak out

‘Officers told me they were going to arrest them both.’

In April this year, Anokye Frimpong Andrews, 44, of Milton Keynes, was found guilty of two counts of indecent assault, seven counts of rape and one count of assault by penetration at Aylesbury Crown Court.

Mary Louisa Andrews, 50, of Milton Keynes was found guilty one count of cruelty to a person under 16 years.

Anokye was sentenced to 20 years in prison and Mary was jailed for five years.

Rochelle said: ‘I’m relieved that they were both jailed, but I’ll never forgive Anokye for ruining my childhood.

‘I’ll also never understand how my mum let him rape me.

‘She failed me just as much as he did.’

Related posts:
09/11/2019 World News Comments Off on Victim, 28, reveals how stepfather raped her when she was nine
Recent Posts
We and our partners use cookies on this site to improve our service, perform analytics, personalize advertising, measure advertising performance, and remember website preferences.Ok