Victoria has recorded 10 new cases of COVID-19 in the past day, up from just five cases on Monday. Seven more people have died.

Today's figures bring the state's 14-day average, tied to the next stage of easing, to 18.9.

The goalposts have shifted slightly with the step three target for easing restrictions. For step two, the 14-day average used was based on cases in metropolitan Melbourne but for step three the average is for all of Victoria.

There also have to be fewer than five "mystery" cases statewide over the previous two weeks for restrictions to be eased further.

Today, the number of active cases with no known source is 27.

Once the 14-day average has been driven below five and community transmission has in effect been wiped out, Melbourne can then move to step three of easing.

The Victorian government has tweaked the date linked to the threshold for this next stage to October 19, one week earlier than the original roadmap.

Even if the state reaches the data targets for new cases and 'mystery cases' beforehand, the third step won't happen until then.

Today's new cases come after Melbourne enjoyed its first night without a curfew since August 2. 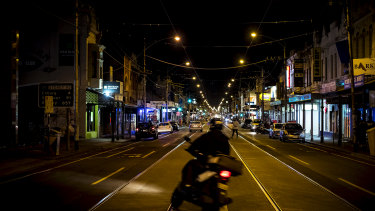 Melbourne’s streets were still quiet despite the lifting of the curfew on Monday night.Credit:Chris Hopkins

On Monday, three new locations were added to the Victorian Department of Health's register of businesses visited by a COVID-positive person in the past two weeks.

Anyone who has visited Dan Murphy's in Doveton on Sunday between 12.30pm and 3pm, and/or Woolworths and Continental Mart in Springvale during the same time is being asked to monitor for
any symptoms and get tested as soon as possible if they appear.

Monday marked the first time specific timeframes were published for exposures in Victoria, while it has been standard practice in NSW for many months.

As of Monday there were 359 active cases remaining in Victoria, including 182 cases linked to aged care and 60 healthcare workers.

All five of Monday's new cases were linked to outbreaks in aged care or healthcare in Brimbank, Casey, Glen Eira, Moonee Valley and Wyndham.

Further details about today's cases were not yet available.