The following facilities within the Perth and Peel regions will need to close over the course of the lockdown:

The WA government has released a preliminary list of exposure locations the man who contracted COVID-19 while in hotel quarantine visited once he finished his stay.

The man, who tested positive for the virus upon travelling home to Melbourne, is of greatest concern to the government as he moved about the city after leaving hotel quarantine.

He completed hotel quarantine alongside a family from the United Kingdom, of which two contracted COVID-19 from a couple who arrived from India and were located across the corridor.

The ‘Victorian case’ tested negative on day 12 of his hotel quarantine and was released on April 17, staying with a friend and her two children in Kardinya, before leaving for Melbourne on April 21. After isolating in Melbourne on advice from WA Health, he returned a positive COVID-19 test.

A rapid test on Friday returned a positive result for the man’s friend.

Contract tracing began immediately and WA Premier Mark McGowan said details of the locations visited by the man and his friend would be finalised and released publicly as soon as possible.

The annual Anzac Day AFL tribute match at Optus Stadium will go ahead without crowds due to a snap three-day lockdown from midnight in Perth and the Peel region.

The Fremantle Dockers were set to welcome more than 40,000 fans to Optus Stadium on Saturday night for the 25th anniversary of its Len Hall Tribute match.

Their opponents North Melbourne had just landed at Perth Airport on Friday afternoon when news of the impending restrictions became known.

Thousands of Super Rugby fans are still able to attend HBF Park in East Perth on Friday afternoon for the Western Force’s crucial match against the Queensland Reds at 5.45pm, with the WA side looking to lock in a finals berth.

Perth Arena would also be allowed to welcome thousands of sports fans for the 7.30pm tip-off between reigning NBL basketball champions Perth Wildcats and the Brisbane Bullets.

The inaugural Chicken and Beer Festival at Subiaco Market Square this long weekend would be able to operate only on Friday night, where a six-hour session was planned until 10.30pm.

COVID-19 has claimed a second year of Anzac Day services.

Around 100 events planned in WA are cancelled.

Instead, like last year, Australians must stand on driveways or balconies, in paddocks or living rooms, with candles. 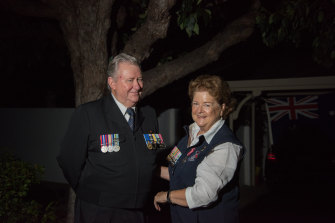 “I too will be at the end of my driveway on Anzac dawn,” Police Commissioner Chris Dawson told a press conference on Friday.

This year 10,000 were to be permitted to attend an Anzac Day dawn service at Kings Park with SafeWA check-in required and social distancing and face masks encouraged. This was about a third of the usual size crowd.

The gunfire breakfast was limited to 2000 with check-in required and social distancing enforced.

The parade was to proceed with check-in required along the route and attempts to reduce the crowd.

The commemorative service was to proceed with check-in required, distancing enforced and masks encouraged.

Sub-branches were prevented from holding anything bigger than a 300-person 11am service.

Some could not hold one at all due to difficulty meeting stringent requirements.

“Careful planning and consideration has gone into the event to ensure the safety of participants and patrons,” RSLWA chief executive wrote to media ahead of the event.

And the panic-buying begins…

There are a few things inevitable in this world; death, taxes, and now – in the wake of the coronavirus pandemic – we can add ‘panic-buying at the mere mention of lockdown’ to that list.

WA Premier Mark McGowan had not even stepped up to the podium to deliver news on Perth and the Peel region’s snap three-day lockdown (although he had delayed his press conference several times) before the rumour mill rumbled into action and sent anxious residents rushing to their nearest supermarket. 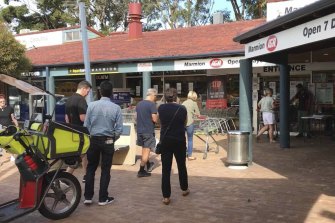 A line of shoppers outside Marmion IGA on Friday afternoon. Credit:Cath Stringer

Already there are reports of people being turned away due to the sheer volume of shoppers stocking up on ‘essentials’. 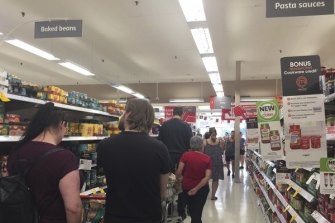 The latest was a man who completed his two-week stay before flying to Melbourne, where immediately upon landing he was told by WA Health he had potentially been exposed to the virus and went into isolation.

Victorian Health Minister Martin Foley said the man wore a mask on the flight and at Melbourne Airport, however everyone on board the QF778 flight would need to self-quarantine for 14 days.

Mr Foley said the man, who was asymptomatic, was picked up by his partner and driven to his home where he isolated from his two children.

He then decided, at his own request, to re-enter hotel quarantine on Thursday and received his positive result on Friday morning.

Genomic sequencing is under way to confirm the source of the Victorian man’s infection, which was detected on Friday morning.

Mr McGowan said the man completed his two weeks quarantine on April 17 and spent five days in the Perth community.

“This means he spent up to five days in Perth and we now need to assume he was infectious during this five day period,” he said.

A female friend the man was staying with in Kardinya tested positive to the virus on Friday through a rapid test.

“We now have two positive cases that have been in our community from April 17,” Mr McGowan said.

Earlier this week, it was revealed a UK nurse and her four-year-old daughter had contracted the virus after it was believed to have ‘jumped’ the hotel corridor from the room of a couple who had recently returned from India and tested positive for COVID-19.

Welcome to our live coverage

Welcome to our live blog.

Western Australia has been thrown into a snap three-day lockdown after coronavirus cases seeped out of the Mercure Hotel in Perth this week. 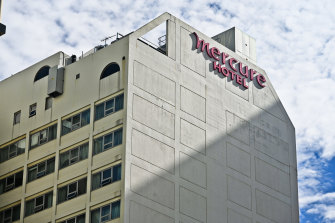 The virus has managed to spread across a floor where a couple who had recently returned from India and tested positive for COVID-19 were quarantining.

A UK nurse and her four-year-old daughter, as well as a man who later flew to Melbourne after completing his two weeks quarantine were among those to contract the virus while staying on the same floor.

There were 18 guests isolating on the same floor.

After leaving hotel quarantine on April 17, the man stayed at a home in Kardinya and was active in the Perth community for five days.

A female friend the man was staying with in Kardinya tested positive to the virus on Friday through a rapid test.

“We now have two positive cases that have been in our community from April 17,” WA Premier Mark McGowan said.

Follow our live blog for the latest developments as the story unfolds.