The “warning signs” of creeping disengagement among students had become obvious by term three this year, as Melbourne’s sixth lockdown stretched into its second month.

Students would log on for class as usual, but some were no longer switching on their cameras and microphones, limiting their engagement to the chat function. 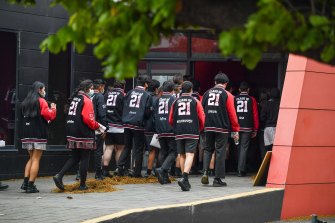 More than 80 per cent of Victorian secondary schools were concerned about student mental health and wellbeing in term three.Credit:Joe Armao

Teachers, also fatigued by months of swinging in and out of remote learning, felt “like radio announcers” broadcasting into the void, and had to find new ways to invigorate their lessons and try to draw students back in.

In the most concerning cases, staff visited students at home to check on their wellbeing and try to re-engage them.

“We had to try a few home visits and just sort of stand outside on the footpath and see if we could connect with some kids and families,” he said.

Victoria’s Education Department has monitored the level of concern within schools about staff and students’ mental health and wellbeing throughout the COVID-19 pandemic.

Its survey data, released under Freedom of Information laws, reveals that concern peaked during term three this year, when schooling was disrupted by the state’s fifth and sixth lockdowns.

Jo Camozzato, principal at Edgars Creek Secondary College, said there was no doubt that this year’s extended lockdown affected students’ mental health and their enthusiasm for school, despite teachers’ best efforts.

“The staff provided well-thought-out and engaging learning activities online – tasks that kids could accomplish at home – but there was definitely a level of fatigue among all the students and they weren’t embracing it as they did last year,” Ms Camozzato said.

Some students continued to produce good work, but others were increasingly disengaged. Remote learning also made it harder for teachers to monitor students’ welfare.

“We communicated online but … the student can actually choose to not stay in touch,” Ms Camozzato said. “That’s tricky. Whereas at school you can always sight them and get a feel for how their wellbeing is on the day.”

In more severe cases, school counsellors were compelled to call on external support to help some children, she said.

The survey of 783 schools was “just one measure to check in on school leaders throughout the periods of remote learning and help us develop further tailored support materials for schools across the state”, an Education Department spokesman said.

The spokesman said the government had made “unprecedented investments in mental health, wellbeing and academic support throughout the pandemic, with a qualified mental health practitioner now in every government secondary and every specialist school across Victoria, and more than 6400 tutors working in schools across the state to support students to thrive academically”.

Kristen Douglas, the head of schools at mental health service Headspace, said efforts to contain the spread of COVID-19 “have hit young people the hardest”.

Spikes in demand for Headspace services coincided with the announcement of extended lockdowns, Ms Douglas said, and “in Victoria, this spike occurred in August”.

“With most of the mental health system overwhelmed, including hospitals and community mental health services, and many private practices being at capacity, young people are left with limited support options”, she said.

More than half of primary school principals surveyed reported concerns about student mental health in term three, the document shows.

The results “resonate pretty much with what my members were telling me verbally around the anxieties” for schools at that time, said Andrew Dalgleish, president of the Victorian Principals Association, which represents principals and leading teachers in government primary schools.

Teachers were finding it more difficult to keep children engaged, Mr Dalgleish said, with more reports of children not attending online sessions or not coming in as often as they should.

The survey shows the proportion of schools concerned about staff health and wellbeing also increased in term three.

The last two years had taken a toll on principals, teachers and school staff, she said, due to the cumulative build-up of increased workloads, the stress of supporting students, families and each other, along with underlying worries about community transmission.

As the school year enters its final days, the mood has lifted appreciably now that students are back on campus, principals said.

“Having kids back, the energy of the school has just been transformed,” Mr Anestis said.

“We’ve had kids that have turned up on days and times when they didn’t necessarily need to be here, [because] they were thirsting for genuine reconnection.”

12/09/2021 World News Comments Off on ‘We had to try a few home visits’: Concern for student welfare peaked in lockdown six
Recent Posts