Washington: US President Joe Biden says the spate of recent extreme weather events in America, including catastrophic flooding in the south and north-east, is a preview of the havoc man-made climate change will cause across the globe.

While touring flood-affected regions in New Jersey, Biden said Americans were experiencing the global warming-induced natural disasters that scientists have long warned about. 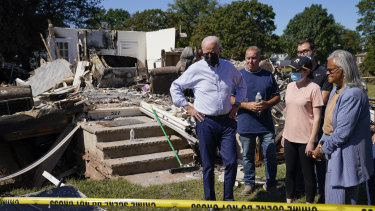 “Every part of the country is getting hit by extreme weather, and we’re now living in real time what the country’s going to look like,” Biden said in New Jersey.

“I think the country has finally acknowledged the fact that global warming is real and it’s moving at an incredible pace, and we’ve got to do something about it.”

Biden said the world can’t turn back the effects of climate change “very much, but we can prevent it from getting worse”. 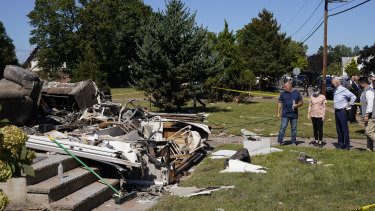 US President Joe Biden surveys the damage and warns of more to come.Credit:AP

Speaking later while inspecting flood damage in Queens, New York, Biden said: “The nation and the world are in peril. That’s not hyperbole. That is a fact.”

As well as 13 deaths in Louisiana linked to Tropical Storm Ida, there have been at least 50 related deaths in the north-eastern states including New York, New Jersey and Connecticut. More than seven centimetres of rain fell in Central Park in an hour when the storm hit, and New York’s subway stations were ravaged by intense flooding.

“For decades, scientists have warned of extreme weather…and we’re living through it now,” Biden said. “We don’t have any more time.”

Last week Biden visited Louisiana to survey flood damage there. A week after Hurricane Ida hit the state it is estimated that almost 600,000 homes are without power. 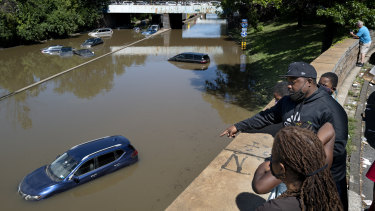 Cars and trucks stranded by high on the Major Deegan Expressway in the Bronx as high water left behind by Hurricane Ida still stands on the highway hours later on September 2.Credit:AP

Earlier this year a team of scientists found that the deadly heat wave that scorched the Pacific north-west and western Canada would have been virtually impossible without human-caused climate change. The heat wave is believed to be linked to hundreds of deaths.

States such as Oregon and California have also suffered some of the most intense and damaging wildfires in their history.

Biden used the floods to push Congress to pass a bipartisan infrastructure bill and a separate US$3.5 trillion spending package that include a massive injection in funding for green energy and climate adaptation programs.

The infrastructure bill, which passed the Senate with bipartisan support in August, includes tens of billions of dollars in funding to protect against drought and floods and reduce emissions from American airports and ports.

It also includes US$7.5 billion to build the nation’s first-ever national network of electric vehicle chargers.

Speaker Nancy Pelosi has set an October 1 timeline to pass both bills through the House of Representatives.

“They’re becoming more common, but they’re more severe and they’re more intense,” she said. “And the effects of climate change that is causing these storms are here, and it’s our job to make sure that we are all ready to respond, as well as prepared.” 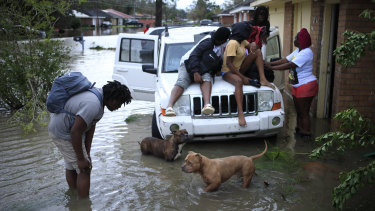 Residents wait to be rescued in LaPlace, Louisiana, after Hurricane Ida smashed through the state. Credit:Bloomberg

At a White House climate summit in April Biden announced an ambitious new target of a 50-52 per cent cut in America’s emissions by 2030 based on 2005 levels.