Jerusalem: The cars are parked bumper to bumper at Jerusalem's Arena stadium, some squashed on to pavements, as hundreds of Israelis arrive for their coronavirus vaccines.

For the past year, the elderly and vulnerable have been forbidden from leaving their homes as the country battles with an explosive infection rate and one of the toughest lockdown regimes in the world. But today they will receive the golden ticket that finally allows them to get on with their lives – and the atmosphere is electric. 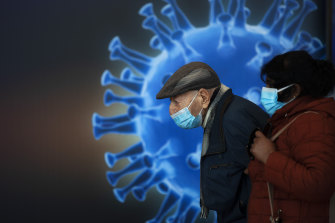 People wearing face masks wait to receive a coronavirus vaccine at a COVID-19 vaccination center in Jerusalem on Monday.Credit:AP

"It's wonderful. One of the best feelings of my life," says Alexander, a 70-year-old Israeli, as the needle pokes into his arm. "I turned 70 three days ago so I think of this as my birthday present."

Sarah Lezmi, the 21-year-old paramedic who administered the jab, says it is difficult to keep count of the number of vaccines being used, such is the furious pace of the operation. "The [patients] are excited. They see it as a blessing. They are taking photos, they're really happy," says Lezmi, who signed up as a paramedic after her national service in the Israeli military.

The Arena is one of the main hubs for Israel's lighting-speed vaccination drive, which has already given the first of two jabs to 1.2 million people and has ordered a further 6 million doses for the 9 million-strong population.

As a number of other nations launch their own ambitious vaccinations programs, the architects of the Israeli model, the fastest in the world, know they are being watched for inspiration. The vaccine clinics are run by Health Maintenance Organisations (HMOs), public health bodies whose nurses and paramedics work from 8am until 10pm each day injecting the Pfizer vaccine. 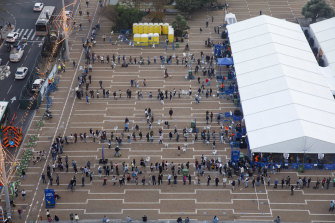 Israelis are legally required to join one of four HMOs but can switch providers, creating a major incentive to offer the best service. There is a fierce sense of competitiveness inside the stadium as Maccabi and Clalit, two HMOs running vaccine clinics, race to get doses out of refrigerated units and into the arms of their excited patients.

"At full capacity we can do 2000 vaccinations in one day," says Naama Mantzur, an operational director at the Maccabi clinic. "We have a good system because we keep it as simple as possible. We let patients know they are eligible for a vaccine by email, and if they don't respond we call them."

For now, Israel is focusing on vaccinations for the over-60s and those with underlying health conditions, though relatives of frontline care workers are also eligible.

After taking a ticket at the entrance, patients are guided into one of a dozen or so tents where the jab is given. Before leaving the centre they are given the date of the second appointment in a fortnight's time. 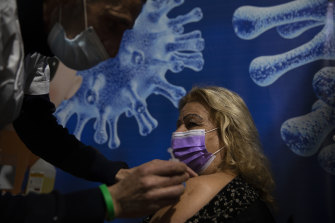 A woman receives a coronavirus vaccine from medical staff at a COVID-19 vaccination center in Ramat Gan, Israel.Credit:AP

As the Pfizer vaccine must be used within six hours of leaving the fridge, officials have been breaking up the 1000-dose packages into smaller trays to reduce wastage. This occasionally leaves behind a surplus of a few doses, which are given to Israelis who turn up without appointments. Officials stress that those patients still need to meet the criteria for receiving a vaccine, such as pre-existing health conditions.

"There is a sense that people are making history and that they are on a mission, a national effort, to come out of this," says Shani Luvaton, a nurse at Clalit, the other HMO at the stadium.

Benjamin Netanyahu, the Israeli Prime Minister, has said he hopes to fully vaccinate more than 2 million Israelis with the Pfizer jab by the end of January, when a fresh batch of the Moderna jab is due to arrive.

Israel has faced some criticism for not vaccinating Palestinians in the West Bank and Gaza, which human rights groups say is a moral and legal obligation for the Jewish state as they are occupied territories. Israel rejects this, pointing to the 1990-era Oslo peace accords, which state that Palestinian leaders are responsible for vaccines. Israel also says it will offer surplus vaccines to Palestinian leaders, who are pursuing their own jabs via the WHO-led Covax scheme.

While many countries are eager to take the lead from Israel in their own vaccination schemes, experts say some aspects will be hard to emulate. With only 34,000 square kilometres of ground to cover, excluding settlements which are also receiving vaccines, the logistical work is fairly straightforward and assisted by Israel's conscript army.

"Israel has experience in managing national emergencies and is used to co-ordinating the healthcare system with the army to get it to respond," said Professor Michael Edelstein, an epidemiologist at Bar Ilan university.

But there will be new challenges on the horizon. Some Israeli analysts say the country specialises in intensive operations, whereas the vaccine drive is closer to a marathon than a sprint.

"The first tens of per cent are the easiest because you are going to attract those who really want it," Edelstein says. "As the proportions increase, some areas will be well vaccinated and some less so, which will call for a more tailored approach."

01/06/2021 World News Comments Off on ‘We’re making history’: Israel’s drive to vaccinate everyone by February
Recent Posts
We and our partners use cookies on this site to improve our service, perform analytics, personalize advertising, measure advertising performance, and remember website preferences.Ok