Washington: Jeffrey Epstein has hobnobbed with some of the world's most powerful people during his jet-setting life. Future President Donald Trump called him a "terrific guy" and commented on his interest in women "on the younger side".  Former president Bill Clinton praised his intellect and philanthropic efforts and was a frequent flyer aboard his private jet.

The arrest of the billionaire financier on child sex trafficking charges is raising questions about how much his high-powered associates knew about the hedge fund manager's interactions with underage girls, and whether they turned a blind eye to potentially illegal conduct. 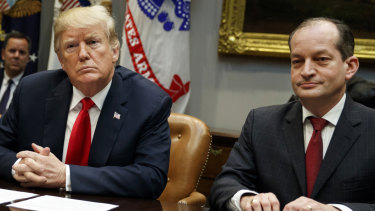 President Donald Trump pictured last year with Labor Secretary Alexander Acosta, who has attracted attention for his role in the case of Jeffrey Epstein.Credit:AP

It's also putting new scrutiny on Labor Secretary Alexander Acosta, who, as US attorney for the Southern District of Florida, was involved in a 2008 secret plea deal that allowed Epstein to avoid federal charges.

The White House has not responded to repeated questions about when Trump was last in contact with Epstein or if he had witnessed Epstein engage in illegal activity with underage girls.

In his most extensive known public comments about Epstein, Trump told New York magazine in 2002 that he'd known the financier for 15 years and praised him as a "terrific guy".

"He's a lot of fun to be with," Trump was quoted as saying. "It is even said that he likes beautiful women as much as I do, and many of them are on the younger side. No doubt about it – Jeffrey enjoys his social life." 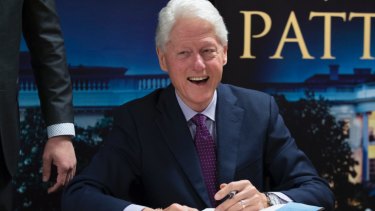 Former president Bill Clinton was a frequent passenger on board Epstein’s private jet.Credit:AP

Trump Organisation attorney Alan Garten has since distanced Trump from Epstein, telling Politico in 2017 that Trump "had no relationship with Epstein and had no knowledge whatsoever of his conduct".

Asked about the charges on the weekend, Trump said, "I don't know about it."

Epstein was also an associate of Clinton's, repeatedly lending the former president his jet to travel overseas. Flight logs obtained by Fox News showed the former president took at least 26 trips aboard Epstein's Boeing 727, nicknamed the "Lolita Express," from 2001 to 2003. That "included extended junkets around the world with Epstein and fellow passengers identified on manifests by their initials or first names, including 'Tatiana," the outlet found.

"Jeffrey is both a highly successful financier and a committed philanthropist with a keen sense of global markets and an in-depth knowledge of 21st-century science," Clinton told New York magazine though a spokesman for that same 2002 story. "I especially appreciated his insights and generosity during the recent trip to Africa to work on democratisation, empowering the poor, citizen service, and combatting HIV/AIDS." 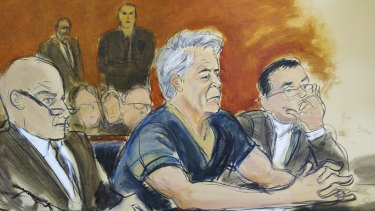 A courtroom artist’s sketch, of defendant Jeffrey Epstein, with attorneys Martin Weinberg, left, and Marc Fernich during his arraignment in New York federal court on Monday.Credit:AP

Representatives for Clinton did not respond Monday to questions about Epstein and the former president's relationship with him.

Also back in the spotlight is Acosta, Trump's labor secretary, due to his role in the deal that ended an earlier investigation involving at least 40 teenage girls. The deal allowed Epstein to avoid federal charges and a possible life sentence. Instead, Epstein pleaded guilty to state charges and served 13 months in jail, during which he was allowed to leave for work during the day.

"I want real justice for these underage survivors – and Acosta to finally answer for his weak plea agreement," tweeted Debbie Wasserman Schultz, who was among a number of congressional Democrats who had asked the Justice Department to reopen the case. 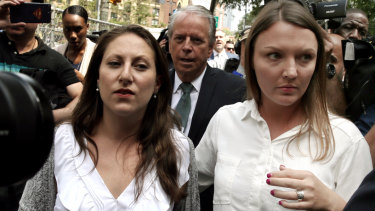 Michelle Licata, left, and Courtney Wild, alleged victims of Jeffrey Epstein, outside the federal court in New York on Monday.Credit:Bloomberg

Then-White House press secretary Sarah Sanders had told reporters in February that the White House was looking into Acosta's handling of the case, but she never offered further details. Trump said in February that he didn't know much about the case but volunteered that Acosta had done "a great job" as labor secretary. As for the Epstein case, Trump added, "That seems like a long time ago."

Epstein is accused of paying underage girls hundreds of dollars in cash for massages and then molesting them at his homes in Florida and New York. He "intentionally sought out minors and knew that many of his victims were in fact under the age of 18," according to prosecutors, who said he also paid some of his victims to "recruit additional girls to be similarly abused".

07/09/2019 World News Comments Off on What did Trump, Clinton and other famous friends of Epstein know and see?
Recent Posts