Anti-discrimination commissions have tyranny built into their design.

God deliver us from the hands of zealots.

They exist in different guises in every age, lay claim to being the era’s moral guardians and demand no more than complete obedience to their ordained order. They only burn heretics in sorrow, for their own good and that of society. 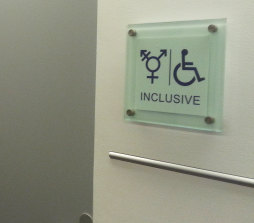 Inclusive bathrooms at the Department of Environment and Energy in Canberra.

Zealots know those who defy them are sinners. So, any means is justified in the restless hunt for evil.

Arthur Miller explained it in The Crucible: “… the necessity of the Devil may become evident as a weapon, a weapon designed and used time and time again in every age to whip men into a surrender to a particular church or church state.”

Now the bureaucratic state dictates morality and the devil is discrimination, in all his endlessly evolving forms. The crime is giving any perceived offence. The weapon is the law.

There is now a witch hunt afoot in Tasmania.

The witch is Liberal Senator Claire Chandler. On July 17 she wrongspoke in the pages of The Mercury: “You don’t have to be a bigot to recognise the differences between the male and female sexes and understand why women’s sports, single-sex change rooms and toilets are important.”

This elicited a response from an unnamed Hobart man who emailed the senator confronting her crimethink. The senator doubled down: “I do understand the difference between sex and gender. That’s why I’ve made the point in my article that women’s toilets and women’s change rooms are designed for people of the female sex (women) and should remain that way.” 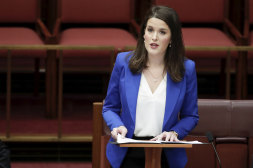 The article and email were referred by the constituent as a complaint to Tasmania’s Anti-Discrimination Commissioner Sarah Bolt. Ms Bolt then wrote to Senator Chandler, noting that the complainant was not a member of the trans-community and dismissing the argument that the article had offended the law.

But Ms Bolt determined the complaint about the email had merit. She found, “a reasonable person is likely to anticipate that a person who is a member of the LGBTIQ+ and gender diverse community would be humiliated, intimidated, offended and insulted”.

Having identified the possibility of an anticipated offence Senator Chandler has been called to a hearing before the commission on October 1.

The senator made a fuss in the media. This drew a second missive from the commission. It noted that it was also an offence to “hinder” or “use insulting language” against the commissioner.

First, Tasmania’s Anti-Discrimination Commission, and all such commissions, have tyranny built into their design. It is meant to be a mediation service – and often is – but can also be advocate, prosecutor, judge and jury in one. This invites quasi-judicial bodies to become star chambers. They now deny a keystone democratic right of a fair hearing before an impartial tribunal. The right to freely complain about this injustice has also been removed by law.

Second, the senator is expressing what was, until recently, a pretty conventional worldview. What has changed is a new protected group has evolved, the trans community, whose advocates demand that those who self-nominate a gender must be accepted as male or female.

Laws are being made about this so debate is demanded, starting with when should someone be considered to have transitioned? Is it after reassignment surgery or just on the strength of nominating the change? This is no small difference and both are claimed.

In a free society, an individual’s right to make personal choices about the course of their lives should be respected and defended. But why should someone else’s subjective truth become an objective reality for the whole of society and the law used to enforce it?

This highly contestable, and evolving, space runs far deeper than a fight over public toilets. It involves questions of truth and identity, which concern us all. There has been little community debate, yet bureaucracies everywhere are conforming with demands in fear of being branded transphobic, the latest in a long list of identity crimes.

But here there is also a clash of ideologies, on what it means to be a woman. Some old-school feminists fear their homeland is being colonised by strident activists. The author J.K. Rowling is one. For defending her truth she has been vilified and “progressive” bookshops have banned Harry Potter from their shelves. And how are these book burners morally superior to the many who marched before them through history?

There is much to debate but that is being silenced in the name of defending human rights, and who dares mount an argument against such a righteous cause?

Because, above all, it is forbidden to question a victim, as Miller wrote, “Is the accuser always holy now? Were they born this morning as clean as God's fingers? I'll tell you what's walking Salem – vengeance is walking Salem. We are what we always were in Salem, but now the little crazy children are jangling the keys of the kingdom, and common vengeance writes the law!”

09/29/2020 World News Comments Off on When freedom of speech is in transition
Recent Posts
We and our partners use cookies on this site to improve our service, perform analytics, personalize advertising, measure advertising performance, and remember website preferences.Ok