A grieving widow’s plans to be buried alongside her late husband have been thwarted after her request to exhume and cremate his body was refused by the Church of England.

Susan Richardson arranged for her beloved husband Eric to be buried in consecrated ground at Bishopswearmouth Cemetery in Sunderland after his death in March 2018.

But following her diagnosis of terminal cancer, Mrs Richardson made plans to move to Northamptonshire to be closer to family and applied for permission from the CoE for her husband’s remains to be exhumed and cremated so they could be buried together.

However, the church’s Consistory Court – the body which has to authorise such moves – has refused Mrs Richardson’s plea to have her late husband’s remains reburied on scriptural grounds.

Adrian Iles, Chancellor of the Diocese of Durham and a Consistory Court judge, ruled that a person’s burial ground should be their final resting place unless there are exceptional circumstances. 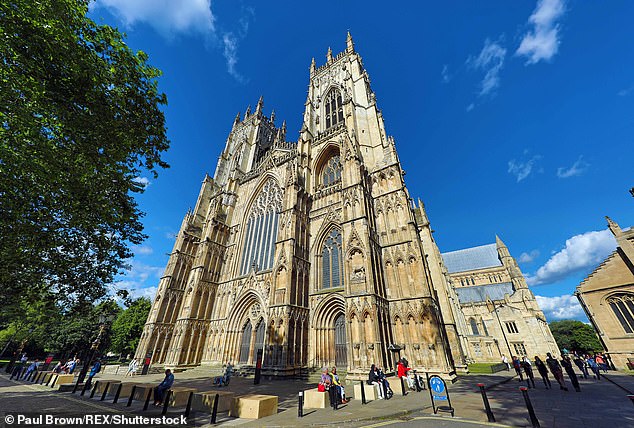 Susan Richardson arranged for her husband Eric to be buried at Bishopswearmouth Cemetery in Sunderland after his death in March 2018. But after she was diagnosed with terminal cancer, Mrs Richardson made plans to move to Northamptonshire and sought permission for Mr Richardons’s remains to be exhumed and cremated from the Church of England (stock)

In this case, the senior churchman argued that Mrs Richardson’s reasons ‘do not amount to exceptional circumstances’.

Mrs Richardson, who married her husband in 1975, said in her petition for exhumation that her late partner had indicated before his death that he wanted to be cremated.

But she ultimately decided to have his body buried ‘so that she would have somewhere to visit him and so that she could be buried with him in the same plot on her death’.

After the burial, Mrs Richardson contacted the funeral directors to say she had made a mistake by not fulfilling her husband’s wishes.

They advised her to take time before applying for permission to exhume the remains to ensure she was making the right decision.

The Chancellor said he received a letter from her which explained she is suffering from terminal cancer and said that her plan was to move to Northamptonshire to be with her son and his family – and where her own ashes could ultimately be buried with those of her husband.

He said that funeral directors had confirmed it was her intention to have her husband’s ashes buried in consecrated ground in Northamptonshire.

However, citing Church philosophy, Chancellor Iles said ‘disturbance of remains which have been placed at rest in consecrated land can be allowed only in exceptional circumstances’.

The churchman added: ‘There is a general presumption of permanence arising from the initial act of interment.

‘Mrs Richardson is having difficulty coming to terms with the death of her husband. It was a long marriage, and her grief is natural and not unexpected.

‘Unfortunately for Mrs Richardson, however, the reasons she puts forward for wishing to exhume his body do not amount to exceptional circumstances so as to justify a departure from the norm of permanence. I therefore dismiss the petition.’

01/13/2021 World News Comments Off on Widow's plans to be buried with her late husband thwarted by CoE
Recent Posts
We and our partners use cookies on this site to improve our service, perform analytics, personalize advertising, measure advertising performance, and remember website preferences.Ok