Wilko is planning to close 16 stores this year, the retailer announced today in a fresh blow for the high street.

The firm said the stores affected will close as leases end and favourable terms cannot be agreed, adding it will not affect its new openings or stores relocation programme.

The GMB union said it was ‘another nail in the High Street’s coffin’, warning that hundreds of jobs could be lost. 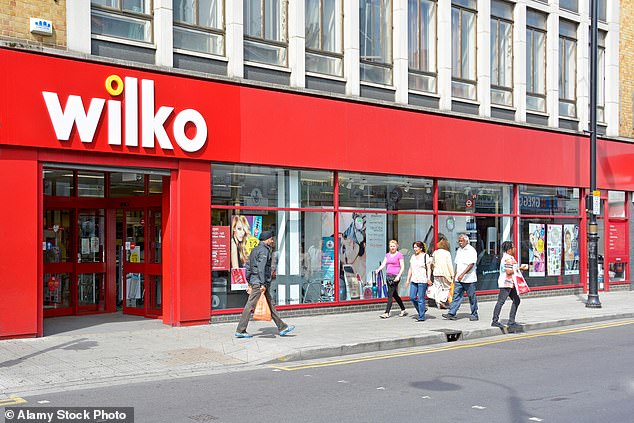 Wilko said the stores affected will close as leases end and favourable terms cannot be agreed, adding it will not affect its new openings or stores relocation programme

Jerome Saint-Marc, Wilko’s chief executive said: ‘Our history is steeped in serving our customers and communities going back to 1930 but there’s no denying the way people shop with us and where they want to shop with us is changing.

‘As a business we’re evolving and this includes working with landlords for more favourable terms, as well as looking at locations and store formats.

‘We’ll continue to pull together to make our business better to secure the future of over 16,000 team members.

‘We’ll be doing everything we can to support our affected team members who will be offered any available positions in nearby stores.

‘We apologise to those communities where stores are closing but will continue to offer them everything they need in nearby stores or via wilko.com.’

Roger Jenkins, GMB national officer, said: ‘These closures are devastating for Wilko workers and the communities who use them.

‘It’s yet another nail in the High Street’s coffin and GMB calls on councils and landlords to review commercial leases and offer lower rents.

‘Empty high streets and shopping centres are in no one’s interest and but with 400 shops a week closing, this is inevitable, unless the costs of premises can be reduced.

‘GMB will now meet with Wilko members to discuss our next steps.’

Planned closures include Shipley, Bournemouth and Stockton next month, Scunthorpe in March, Grantham and Redditch in May, Rotherham, Skegness and Sutton Coldfield in June, Llanelli in August, Merthyr Tydfil in September and Cleethorpes in October. Orpington and Edmonton Green in London will also shut.

Wilko said 11 of the stores have an alternative Wilko within five miles.