She tried to ‘get away with the perfect murder’: Woman, 56, who pushed 60-year-old friend down stairs in row over £200 owed for cancelled Moroccan trip is convicted of manslaughter after bid to pass death off as an accident 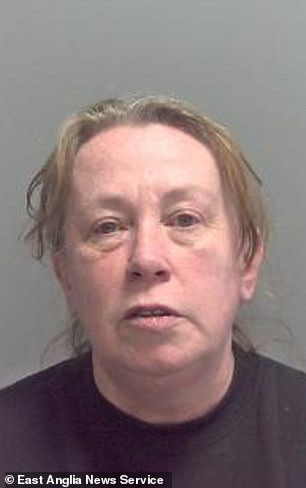 Rosalind Gray, 56, who pushed her friend, 60, down the stairs after they fell out over a cancelled holiday to Morocco has been convicted of her manslaughter

A 56-year-old woman who pushed her friend, 60, down the stairs after they fell out over a cancelled holiday to Morocco has been convicted of her manslaughter.

Rosalind Gray, 56, allegedly owed £200 to grandmother Linda Rainey, 60, after their trip to Marrakesh was cancelled due to a flight mix-up.

The two women exchanged messages in which mother-of-five Ms Rainey asked for her money back and Gray called her a ‘nasty old troll’.

They allegedly argued again when they unexpectedly met up at the home of mutual friend Adrian Lawrence, 54, in Great Yarmouth, Norfolk.

Gray pushed Ms Rainey in the chest as she stood at the top of the stairs sending her flying backwards and causing her to suffer a brain injury.

Prosecutor Andrew Jackson said Ms Rainey’s death would have been an ‘undetected perfect murder’ if it had been put down to a tragic accident.

Ms Rainey died two days after the incident on August 7 last year without regaining consciousness after having her life support turned off in Addenbrooke’s Hospital, Cambridge.

Gray, of Great Yarmouth, and Lawrence set out to pretend her death was an accident and tried to silence witness Emma Walker who had been in the flat.

But Ms Walker spoke to police three days after her death on August 10 and revealed what happened. 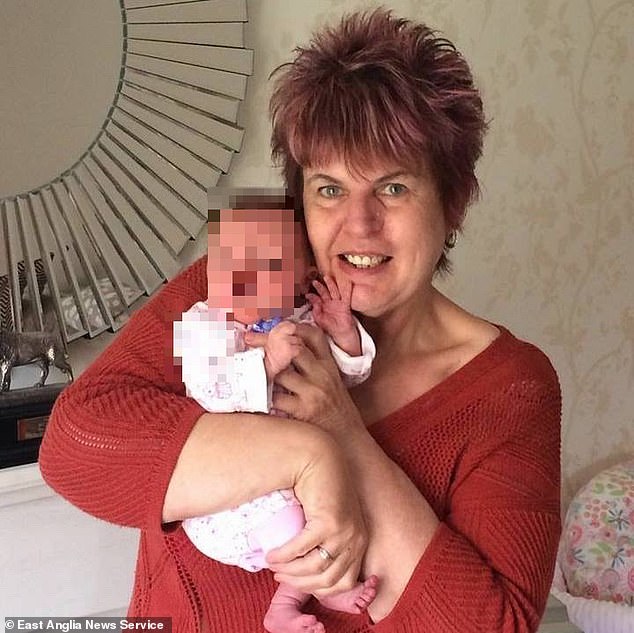 Gray allegedly owed £200 to grandmother Linda Rainey, 60, (pictured) after their trip to Marrakesh was cancelled due to a flight mix-up

Ms Rainey died on August 7 last year without regaining consciousness after having her life support turned off in Addenbrooke’s Hospital, Cambridge

Gray was cleared of murder after she denied the charge, but a jury took less than two hours to find her guilty of manslaughter on Thursday.

She and Lawrence were also convicted of conspiracy to pervert the course of justice between August 5 and August 12 last year after a two week trial.

But he warned her she faced prison, saying: ‘The jury has convicted you of a very serious offence.

‘I have to consider whether you fall to be sentenced under the dangerousness provisions and are considered a real danger to the public.’

The jury were told of some of the 5,493 text messages exchanged between Gray and Ms Rainey from December 24, 2018, until July 31 last year.

Another sent by Gray at 10.11pm on July 30 called her former friend ‘vile’ and a ‘nasty old troll’ and urged her to ‘enjoy your lonely life’.

Lynette King told the court how witness Emma Walker confided in her about being in the flat when she saw Gray pushing Ms Rainey, which caused her to fall down the stairs. 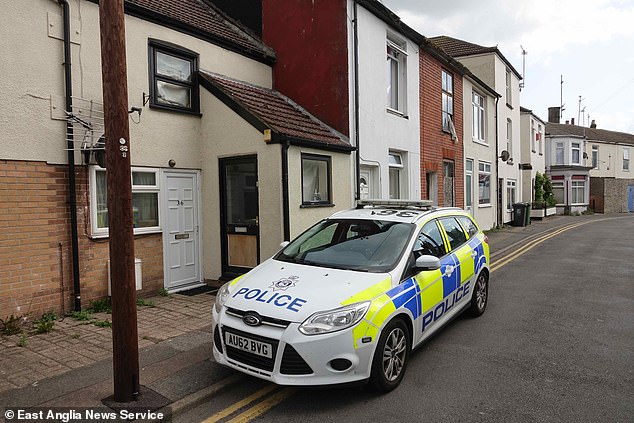 Police at the scene after grandmother Ms Rainey suffered fatal injuries when she was pushed down a flight of stairs in Great Yarmouth, Norfolk

She said Ms Walker was frightened of Gray but she urged her to tell the truth, saying she would phone the police herself if Ms Walker didn’t.

The court heard how Gray had once carried out an arson attack and on another occasion had held a knife to the throat of Ms Walker’s boyfriend.

Ms King said in the end she phoned police with the agreement of Ms Walker and told them what had happened between Gray and Ms Rainey.

Detective Chief Inspector Mike Brown of Norfolk Police said after the hearing: ‘Rosalind Gray and Adrian Lawrence immediately knew the seriousness of Rosalind’s actions and went to great lengths to cover it up, even after Linda died.

‘I would like to thank the witness for their bravery and assistance throughout our investigation and during the trial. Without their honest and consistent account of the circumstances leading up to, and during the days after the incident, we may not have ever known the truth behind Linda’s untimely and tragic death.’

08/07/2020 World News Comments Off on Woman, 56, who pushed friend, 60, down stairs convicted manslaughter
Recent Posts
We and our partners use cookies on this site to improve our service, perform analytics, personalize advertising, measure advertising performance, and remember website preferences.Ok