ITCHY eyes, constant sneezing and pounding headaches – all symptoms that can leave you feeling terrible.

They're also all the classic signs of hay fever and those are only worsened by rising pollen levels. 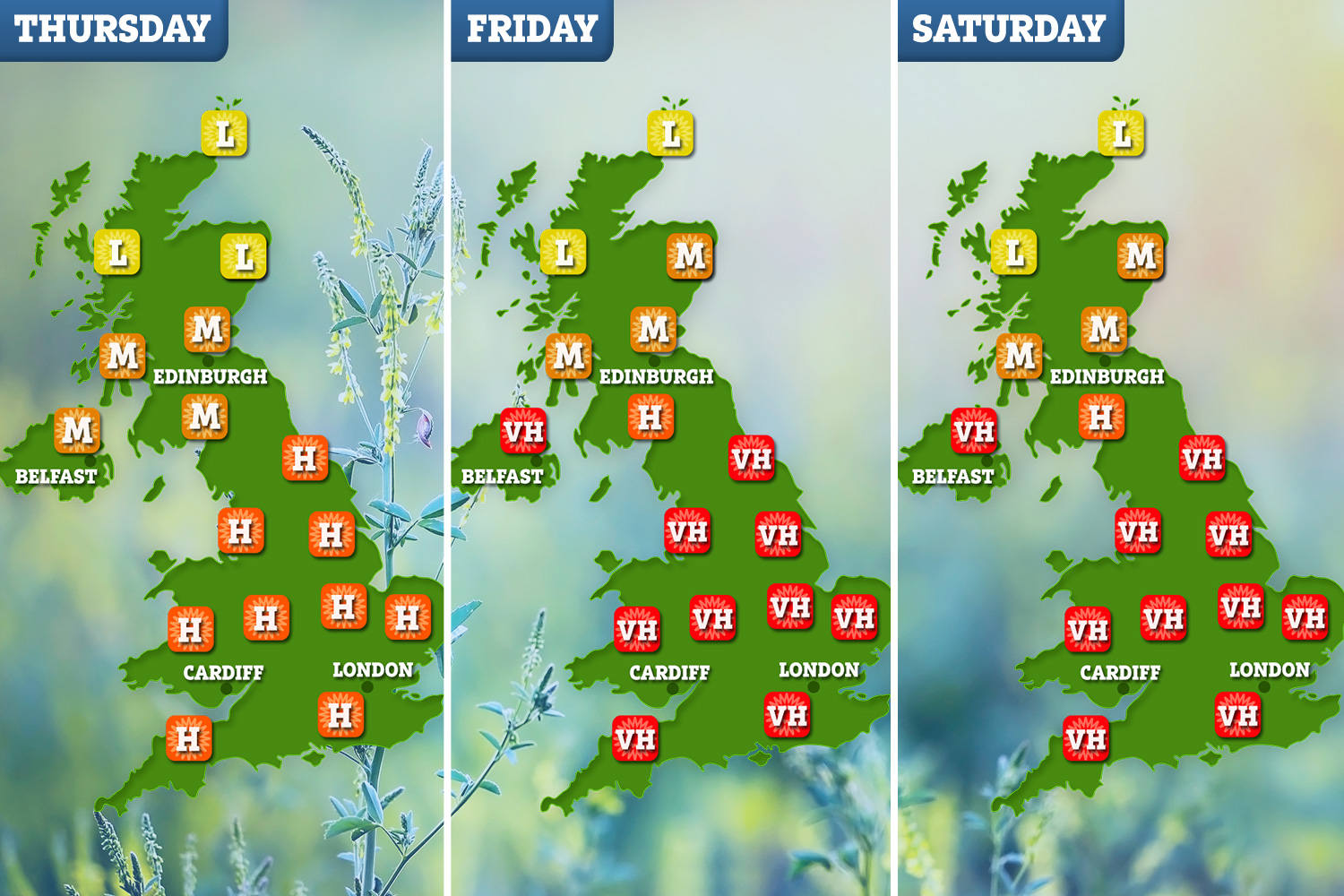 A so-called pollen bomb has exploded across the UK this week – with levels reaching "very high" for most of the country.

Pretty bad news if you're one of the estimated 10 million hay fever sufferers in Britain.

But is it a legitimate reason to take time off work?

For those lucky enough not to get hay fever, it may seem a ridiculous suggestion – nothing more than a pathetic excuse.

But in severe cases, the allergy can trigger deadly asthma attacks, with others left unable to drive and operate machinery due to their symptoms and the drugs they have to take to try to get some relief.

Allergy expert Dr Jean Emberlin previously told The Sun: "If symptoms are severe enough to impact your ability to do your job, certainly take a day off sick.

"Depending on what your job is, having very watery eyes or frequently sneezing may have a significant enough bearing on your ability to perform at the required level.

If symptoms are severe enough to impact your ability to do your job, certainly take a day off sick

"And in those cases, taking a day off work is a necessary measure.

"Another key point is that even if people aren't off work as a result of their hay fever, their productivity may be adversely affected by their symptoms, meaning the impact of hay fever on work extends further than missed days."

But she said, if you are forced to take time off work with hay fever, it is important to see a GP or pharmacist, to ensure you have the right medication.

And Dr Emberlin said it's worth remembering hay fever symptoms, while they feel a lot like a nasty cold, aren't contagious so there's no need to worry about spreading the misery.

"If your job involves lots of driving and your hay fever is causing your eyes to stream and you to sneeze frequently, that is certainly bad enough not to go to work," she added.

How to beat the pollen bomb

THERE are plenty of treatment options to alleviate symptoms for hay fever sufferers.

Boots pharmacist Natalie Masters said: “You may have seen reports on rising pollen counts this weekend.

"If you’re a hayfever sufferer, don’t panic. When there’s more pollen in the air, your symptoms may worsen, but there are lots of steps you can take to alleviate these.

"Prevention is key, which means avoiding coming into contact with pollen in the first place.

"Grassy areas are often best avoided and if you can, don’t spend time outdoors at the times when pollen counts are highest, typically the early morning and late afternoon and evening.

"If you need to go outside, applying a petroleum jelly balm to the inside of your nostrils or using an allergy barrier nasal spray can help prevent pollen from entering your nostrils, whilst larger wraparound sunglasses can help stop pollen from irritating your eyes.

"There’s also several products you can purchase which can help to alleviate your symptoms when they start flaring up.

"Speak to your pharmacist about anti-histamine tablets, hayfever eye drops or a suitable steroid nasal spray.

"If you’ve been outdoors when the pollen count is high, make sure to shower and wash your hair once you get home to wash away any stray pollen particles.

"Regularly vacuuming and dusting your house with a damp cloth and washing and drying your clothes indoors may also help to keep your home a pollen-free zone.

"Importantly, try not to be worried or stressed about your hayfever. It has been claimed that hayfever can be exacerbated by this, so try to keep calm and consider different products and methods – hopefully you’ll soon find what works best for you.”

Branded products are also on offer at two for £6.

Hay fever can be very debilitating for sufferers, interfering with all aspects of work, family and your social life.

For teenagers at this time of the year, it can impact on their performance in exams or at sporting events.

And it can trigger asthma, in severe cases.

"If it's not managed properly, hay fever can evolve into asthma," Dr Emberlin said.

"This is obviously a serious condition, with significant health and lifestyle implications."

Hay fever can also be bad news for the estimated 3.5million people with asthma in the UK  – as pollen can trigger their asthma.

When pollen is in the air it can inflame people’s airways, triggering asthma symptoms

Dr Andy Whittamore, GP and Clinical Lead at Asthma UK warned that high levels of pollen in the air can "inflame" the airways and spark a potentially fatal attack.

He previously told The Sun: "When pollen is in the air it can inflame people’s airways, triggering asthma symptoms.

"Stormy weather can make it worse as it breaks the pollen into much smaller particles, which are then inhaled more deeply into the lungs.

“If you have asthma and are already noticing more symptoms because of hay fever, such as coughing, a tight chest or breathlessness, make sure you keep your blue reliever inhaler with you at all times."

Experts predict a million new people will develop an allergy to pollen this summer.

An estimated 26 per cent of adults in the UK reported suffering from hay fever in 2017, according to research.

Last year that figure increased to 31 per cent with a million new people buying hay fever medicines and remedies for the first time.

The rise is believed to be due to changes in our climate as weather conditions become more extreme clearly defined seasons are blurred.

Experts say a long winter followed by a short spring condensed the flowering season of trees and shrubs into a much shorter time period.

They say this causes a so-called "pollen bomb" as plants burst into life at the same time.

06/20/2019 World News Comments Off on You really can take a day off work with hay fever, docs say – as pollen levels soar – The Sun
Recent Posts